Switches are used to extend a network, taking one port of your router and turning it into many more ports. Switches are intelligent enough to take an incoming signal, look at where it was going and only relay it to the relevant outbound port. Today, they mean the same thing.

Most switches you’ll find in a home network are unmanaged, which means there’s nothing for you to configure – just plug them in and they work. No software or programming necessary. Switches come in a number of sizes and can cost as little as $19.99 for a Gigabit 5-port switch. Note that one port on both sides will be used as an interconnection, so a 5-port switch actually only has 4 usable ports to connect more devices, and you’ll be losing one of your router’s ports too (so if your router has 4 ports which are currently in use, adding a 5-port switch will give you 3+4 ports in total).

If you need to expand again, it’s best to use one of the original ports on the router – while daisy chaining switches together is possible, this can introduce a small amount of latency each time. If there’s no other option though because the router is too far, daisy chaining one or two times is still preferable to other technologies like Wi-Fi Repeaters or powerline adapters. 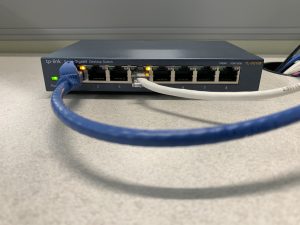 Powerline networking involves piggybacking a network signal on top of mains power electrical distribution, by manipulating frequencies not used for the AC current. All that’s needed are some inexpensive adapter plugs such as this model which can then be connected to devices by standard Ethernet cable – you don’t need any special drivers or software to use.

The network signal itself is carried all over your house through the existing wiring, so it’s a great solution where installing traditional network cabling isn’t possible but you want better performance than wireless.

Depending on the age of your household wiring, the distance between the points, radio interference, and other factors, Powerline can be a substitute for running physical Ethernet cable to devices such as TV and streaming devices. 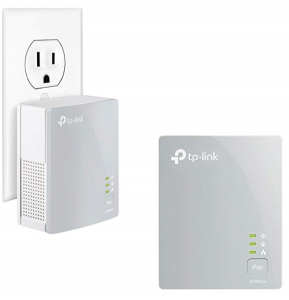 What should you use?

In short: using wired Ethernet connections is always preferable. It offers the fastest speed, the best reliability, and the lowest latency. Use wireless only for devices where you don’t have the option, and don’t waste money on a fancy wireless-AC router unless you know your devices support it. Powerline adapters have alot of variables, but may be preferable to wireless if you can’t run cables and aren’t getting good wireless coverage in a specific area of your home – thankfully they’re now relatively cheap and most places offer some sort of return policy, so it’s not a huge loss if they turn out not to work with your particular setup.